by hiroaki
hello there, 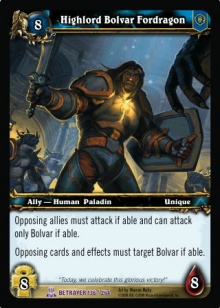 by Ghost
I'm 99% sure you would have to target Bolvar in this case, due to the wording on that card (it's "Fire and Brimstone" right?).

If the card were worded something like this: "Choose ability, ally, or equipment. Destroy target card of that type." Then you could choose either equipment or ability and get around Bolvars power - but with the card Fire and Brimstone you can't.

by hiroaki
Nope, it's not Fire and Brimstone, but something like that

Some friends and me played Ragnaros-Raid and one of his cards said sth similiar to Fire and Brimstone. So you say i have to target Bolvar except the card says "Choose" before?

by Spass
Do you mean one of these two?

Both of them say "target", so it goes to Bolvar.